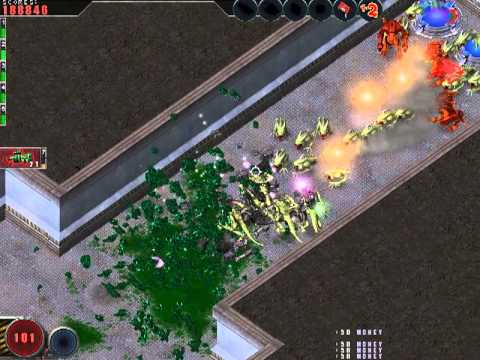 Like’ the video to show us which runs you enjoy most. Current best low% time on SDA by horned. (These are individual level runs that were spliced into one video). © 2013 SDA. IMPORTANT: @SDAspeedruns is hosting Awesome Games Done Quick 2014 from Jan. 5th-11th, more info here

This game is easy to go, but difficult to run. There are no quicksvaes/loads, no ability to rerun previous level and few bugs. But two of wich can be used for reducing time of run. Firstly one is shot through a wall from some kind of weapon (especially plasma), which is working if close to wall only; also it’s not necessary to kill blue monster in eight mission. Unlike alien shooter 2 this game has significant difficulty that all monsters must be killed on every level (except 8). So I prefer extra shooting on suspicious places (especially level 9 with huge amount of monsters). In beginning of game I chose a female character because it has higher speed and accuracy (but lower health and strength). First 4 levels I had to economize money and open richest caches order to purchasing three speed implants in fifth level. Also money from 5,6 and 7 levels used to purchase magma in level eight so I even got some extra money at that time. ~Horned

Alien Shooter is an isometric arcade game released by Sigma Time in September, 2003. The game follows the actions of a marine tasked to clear out an experimental laboratory where teleportation devices have allowed legions of aliens to pour into the world, using a variety of weapons, tools and bio mechanical implants.

UraniumAnchor’s channel (guy who made the highlight/blooper reels for AGDQ/SGDQ 2013). Thanks UA!
———————————————————————————
SDA Home
SDA Live Streams
Live speed runs
More live runs (Founded by Cosmo)
—————————————————-
For those who stumble across these videos, a speed run is a video of a person or persons, completing a game as fast as possible using any means possible. This can include glitches, abusing in-game mechanics and skipping items or even playing events out of sequence.