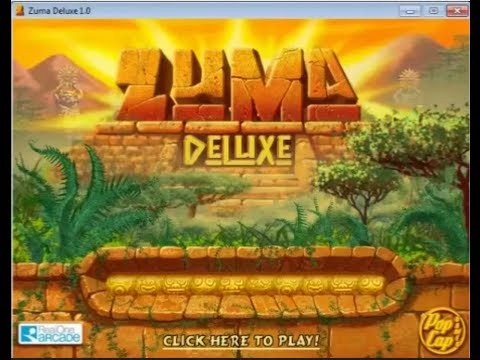 FACEBOOK :
——-
This game’s got some balls : Zuma Deluxe by PopCap. The goal is to make it through 13 different mayan temples by matching together balls of various colours. You take control of a frog and a common misconception here is that the frog’s name is Zuma. As far as my knowledge, Zuma is the name of the shaman priest you see throughout the game, while the frog has no official name. Anyway, in each level a string of balls will roll on screen along a track of various shapes, with a skull at its end. Some levels have two separate tracks with two skulls. Your job is to eliminate all the balls before they reach the skull. If they fall into the skull’s mouth, then you lose a life indicated in the top left – you start off with 2 and receive an extra life every 50.000 points. The speed at which the balls roll towards the skull will obviously increase as the game progresses. Your frog will usually sit close to the middle of the screen, surrounded by the track in such way that no matter where you shoot a ball, it will always land in the track. The frog will shoot balls of random colours out its mouth and the gem on its back will indicate what colour the next ball is going to be. You control where the frog is shooting by pointing with the mouse. You shoot a ball with the left mouse button and you swap the current ball with the next one (indicated on the frog’s back) with the right button. Shooting a ball next to at least other two other of the same colour, will cause that set to explode and leave a gap. If the balls on either side of that gap are of the same colour, the set of balls closer to the skull will roll back and slam into the leading end. If there are two or more balls of the same colour on one side of the gap, and a third one slams into them from the other side of the gap, you get what’s called a combo bonus: depending on how the balls are arranged, you can get a double, triple or even quadruple combo, if you can keep the domino effect going. Combos are very hard to plan in advance – it’s all about luck. The string of balls will keep rolling on screen until you fill up the meter at the top of the screen: the more points you get the faster it fills. When it fills up completely and it turns green, no new balls will roll in, and all that’s left is to eliminate the ones left on screen. When all the balls are gone, you will be taken to the next level. Occasionally, a coin will show up somewhere behind the track of balls. The only way to reach it is to create a gap in front of the coin and then quickly shoot a ball through it to hit the coin. You have to be fast because the coin is only there for a few seconds and if the balls on the sides of the gap are of the same colour, the gap will try to slam shut and your shot won’t reach the coin. The best strategy when you have a coin in sight is to double click the mouse button so that the first shot opens the gap and the second one hits the coin immediately after. Aside from giving you points, coins also fill up the meter faster. You can also get some powerups which appear on random balls: the arrow pointing backwards will reverse the direction of the string for a few seconds, making it roll away from the skull. A ball with two vertical bars in the shape of the “PAUSE” symbol will slow the balls down. A flashing circle in the middle of a ball acts as a bomb and destroys other balls next to it, and finally the ball with the two circles equips your frog with a blue laser guide, making your aiming easier and accurate. You activate these powerups when the ball carrying them is destroyed. Anyway, there’s no need to explain the game in such detail – I mean everyone in this world who isn’t brain-dead could probably play Zuma right away ! All I can say is that the game is fun, entertaining and amazingly addicting, despite its mere simplicity. It’s very intense, because you can never take a break – you have to constantly react and keep your eyes and mind alert, so it can also act as a mind-stimulating game. If you feel you’re falling asleep at work or in class, play some Zuma and you’ll be back to life in minutes. One minor complaint I have is that the music could have used more variety, but because you’ll be focusing more on the game and not on the soundtrack, it’s not a major issue. Zuma Deluxe is truly “balls to the wall” – try it out ! I guarantee you’ll have a hard time turning off the computer ! This one gets the official Daniel’s Game Vault seal of approval !